In the early 1970s, a group of visionary people from Melbourne’s Jewish community recognised a need for a Progressive Jewish day school. Among them were educationalists, Rabbis and members of Temple Beth Israel, and their vision became The King David School.

The Kooyong Road property was purchased in May 1977 from The Melbourne Bible Institute. The first School Council was elected and a dedication held on 27 November 1977 with Rabbi John Levi, Rabbi Brian Fox and Rev Claude Schwartz. In February 1978, the School commenced teaching 45 students, under the supervision of founding Principal, Norman Rothman.

The King David School quickly grew in popularity and in 1984 the Magid Campus opened in Orrong Rd, and in November 1986, both properties were dedicated by His Excellency, the President of the State of Israel, Chaim Herzog. In 1991 the School expanded yet again with the opening of the Joyce and Mark Southwick Pre-School Centre located adjacent to Temple Beth Israel which operated until the end of 2019. 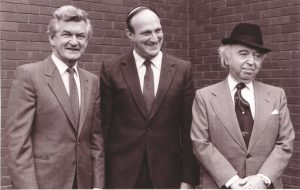 In the late 1990s the school expanded its teaching to include a VCE program. The first King David School Year 12 students graduated in the year 2000. Due to a rapid rise in student numbers in 2002 the John and Robyn Levi Centre in Carlisle St, Balaclava, opened its doors to students from Years 3 to 6. This was a temporary accommodation which was utilised from 2002 to 2005.

In March 2011, the new Rebecca Magid Centre at 520 Orrong Rd, Armadale was officially opened by The Hon Mark Dreyfus and made available to Middle and Senior School students, state of the art music, media and visual communication facilities as well as a multi purpose hall with seating for 350 guests.

In 2012, School Council announced an ambitious building project, Chai Ve’kayam (life everlasting) which would be the biggest capital undertaking in the School’s history.  The vision was to provide brand new or fully refurbished learning spaces for all students from Kindergarten to Year 12. With part of the proceeds from the sale of the Southwick campus on Kooyong Road, Armadale and the generosity of the Orloff family, the School commenced the project. The Orloff Family Centre, a brand new purpose built three storey senior school opened in 2016 at the Magid campus which houses Years 9 – 12 students.  In the following year, a state of the art Kindergarten and a fully refurbished Junior School opened at the Dandenong Road campus.

In 2018, the final stage of the project saw the complete refurbishment of the Orrong Road mansion, Southwick House, providing a warm and nurturing environment for students in Years 6-8.  This was named in recognition of one of our founding supporting families, Mark and Joyce Southwick.

In 2020, the Early Learning Centre came together under one roof at the Dandenong Road campus catering for children aged 18 months – 5 years.